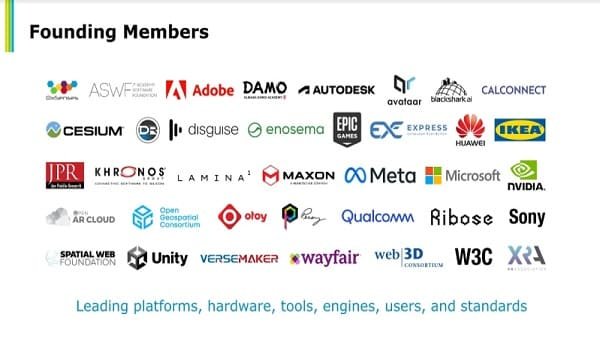 The big tech giants have formed a metaverse standards Group for Meta Universe. This will enable the 33 big companies to exchange and make use of information available to them for AR, VR, 3D Tech, and geospatial.

This emerging metaverse concept would make the tech compatible with each other. The World Wide Web Consortium (W3C) and some of the biggest IT, gaming, and Chip making companies in the world are part of this group.

One thing to notice is Apple was missing from the member list of the group. Meanwhile, Apple is also working on a mixed reality headset which can be introduced this year or next year.

Till now Apple hasn’t publicly accepted the plans for a mixed reality headset, but according to Bloomberg, it has reportedly given its board an overview of the product.

With the introduction of such a device would make Apple a direct competitor of Meta, which has invested laboriously in hardware and its future growth to make its vision of interconnected virtual worlds a reality.

Facebook parent company Meta is set to release a mixed-reality headset this year with the code name of “Cambria”. This could be the beginning of a new virtual world.

Niantic creator of pokemon go and Roblox, which have made early strides in blending games and virtual worlds, are also notably absent. More members may end up joining after the group begins operation; it expects to hold its first meetings in 2022.

Nevertheless, the group suggests an interest in standardizing “metaverse” development as a single field. And group clearly clarifies which companies are most interested in creating the standards for Metaverse and indicates which are willing to follow them.