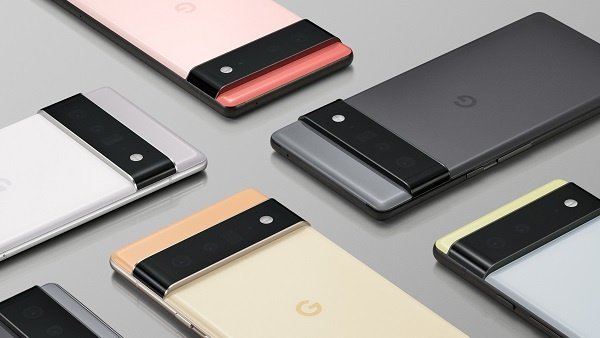 Google has now officially confirmed in its tweet about the upcoming flagship Pixel 6 devices. You can also get info on the teaser website, Finally, google is revealing official pictures and confirming about the rumored smartphone.

This time Google is following Apple’s road with its own custom “Whitechapel Soc”. Google is using this chip for the first time in any of its device, means it is leaving Qualcomm Snapdragon Soc this time.

This “Whitechapel” chip is now officially called “Google Tensor,” and it’s described by the tech giant as “the brand new chip designed by Google, custom-made for Pixel.”

“The highlight of Tensor is that it can process Google’s most powerful AI and ML models directly on #Pixel6. You’ll see a transformed experience for the camera, speech recognition, and many other Pixel 6 features,” Google said in its posts today. “Speech recognition is another foundational technology where you will see a huge improvement in #Pixel6. Google Tensor allows us to make big leaps in Voice commands, Translation, Captioning, & Dictation.”

If we see other benefits of the chip then we can identify that this chip can allow Google to provide Pixel 6 updates for a longer time frame ie, more than 3 years.

Qualcomm only supports the updates for three years in order to sell more chips in the market, unlike Apple which provides support for the chip for almost 5-6 years. Now Qualcomm is not in the way, though, the Pixel 6 support and update timeline will be entirely up to Google.

The Pixel 6 will come in two variants, the “Pixel 6” and “Pixel 6 Pro.” Both the devices will come in three unique colors, and if you’re looking at the pictures, Google says the “Pro” model is the one with the most space above the camera block.

The Pro model has three cameras, including a 4x telephoto, while the base model has two cameras skipping the zoom lens of the “Pixel 6 Pro” model.

This time Google has upgraded the camera chip in year’s ie, since the Pixel 2. If you see you will find out that Pixel 2, 3, 4, and 5 all use the same camera chip, with only updated software that offers few additional features.

Google says the phone will ship in the fall with Android 12 and the sweet new color-changing UI. There’s a Pixel 6 teaser page up on the Google Store where you can sign up for more information.