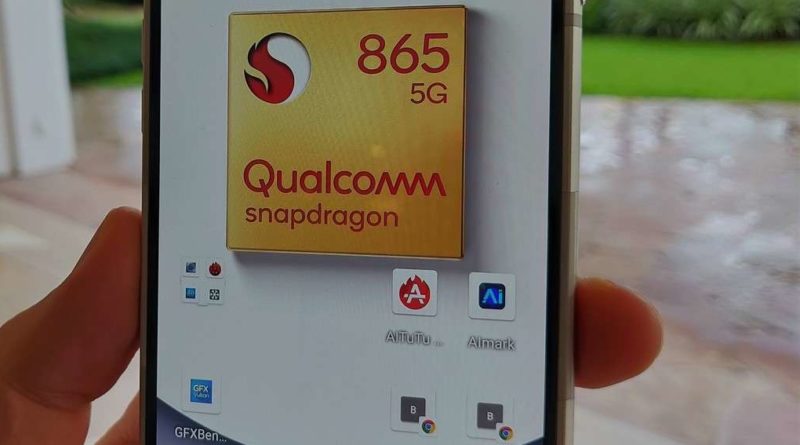 The Smartphone chipset company and the tech giant have unveiled its Flagship processor Snapdragon 865.

This Processor is the successor to last year’s flagship Snapdragon 855 chipset. This chip has improved quite a lot since last year, especially in the 5G network segment.  This chipset is manufactured on the same but improved 7nm fin-fet process from last year.

The Snapdragon 865 features 5th generation AI capabilities that make your voice, camera, gaming, and power efficiency smarter, faster, and spontaneous than ever.

Every year Qualcomm improves their chipsets and provide about 25-30% performance upgrade to the users. This year also company upgraded from Kryo 485 CPU to Kryo 585 (Up to 2.84 GHz) which increases about 25% overall performance of the phone.

This year Qualcomm used its new Spectra 480 ISP which is capable of processing up to 2 Gigapixels in a second. The new ISP is capable of recording 8K video and can capture  200MP photos with simultaneous capture of 64MP and 4k HDR video.

In terms of Connectivity Qualcomm is providing an X55 Modem chipset with Dynamic Spectrum Sharing.

The 5G highest Download Speed is 7.5 Gbps with Multi-SIM 5G support and top upload Speed up to 3 Gbps.

For Wi-Fi and Bluetooth Qualcomm used its ‘FastConnenct’ 6800 with always-on Wi-Fi sensing, Wire equivalent latency in its 60GHz Wifi.

For Gaming Qualcomm has used Adreno 650 GPU which is the successor to Adreno 640 used in Snapdragon 855 chipset.

This GPU can easily play an 8K 360 VR video with good frame rates. This would be very beneficial at the time of Streaming VR games.

All this combined with the CPU makes it the most powerful GPU in a small form factor that can run most of the games at over 100Fps and refresh rate and many games in above 60Fps with the highest details possible.

Qualcomm this time worked well in terms of the display as now it supports max On-device display of [email protected] 60Hz and QHD+(2K)@ 144Hz.

The external device display support is [email protected] 60Hz. The Display also supports HDR10+, HDR10 with Color Gamut of Rec 2020, and Color Depth up to 10-bit.

The Flagship processor Snapdragon 865 supports up to 4x16bit, LPDDR5 2750MHz memory which is quite a good upgrade from LPDDR4 memory.

The Biggest improvement in this generation of SoC is the integration of hybrid LPDDR5 and LPDDR4X Memory Controller.

The benefit of this new memory controller is that in this new chip you will get double L3 cache going up from 1.5MB in S855 to 3.5MB for Snapdragon 865.

other than this there have been some big changes in latency completely different from what we have seen in previous generations S845 and S855.

Qualcomm has been able to cut approx 35ns in the full random-access test. Now according to some estimates, the architectural latency of the chip now has 20ns improvements over its predecessor and settles in at ~109ns.

Despite improvements, it still lags behind the designs of Samsung, Apple, and HiSilicon.

Qualcomm has also made some serious optimization to the cache-line replacement policy at the memory controller level. All these changes will affect real-world performance drastically which we would only know with the release of some smartphones in the market.

In Geekbench also SoC gained about a 35% performance bump in single-core and 34% in multi-core score, overall which is good.

When it comes to GFXBench 4.0 the Snapdragon 865 performed well gaining about 20% performance in both ES 3.1 Manhatten 1080p offscreen and ES 2.0 T-Rex 1080 offscreen. But in Jetstream 2 and Speedometer 2 the processor performed average which is 5.6% and 7.2% respectively.

Despite everything, the Flagship processor Snapdragon 865 lacks so much and didn’t stand well even after a year of work. Firstly, the modem used in the snapdragon processor has not been integrated means the companies have to compromise on battery space results in less battery size or a little thicker phone.

Thirdly, this modem thing also affects the companies who are giving the headphone jack in their phones, now they have to compromise more on space than before.

Is it Good to buy expensive 5G enabled phones in 2020

5G seems fascinating technology but it is still in the early stages and is costly for most users. For many people, 4G is sufficient for most of the tasks. Truly speaking 5G is only for heavy downloaders and uploaders. Talking about smartphones, 2020 is going to be full of 5G smartphones but according to me, companies are going to charge a heavy amount from the customers because of this tech.

If you really want to enjoy 5G at a better competitive price I would suggest waiting for 2021. But if you are not rich are buying a phone for the first time then definitely buy 5 G-enabled phones because your phone will become future-proof with this tech.